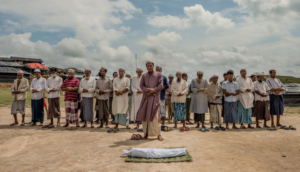 BANGKOK — Doctors Without Borders estimated on Thursday that at least 6,700 members of Myanmar’s Rohingya Muslim minority, including 730 children below age 5, had met violent deaths there in the month after a military crackdown on their villages.

The campaign against the Rohingya, which began in late August, has been called “ethnic cleansing” by the United States and the United Nations. Survivors who fled to neighboring Bangladesh gave consistent accounts of executions, gang rapes and burned homes.

But with Myanmar’s government blocking international access to the area of western Myanmar where the Rohingya once lived, estimates of the toll have been hard to ascertain.

Doctors Without Borders, the international medical charity also known as Médecins Sans Frontières, said that nearly 70 percent of the victims it had tallied died of gunshot and that 9 percent were burned to death in their homes.

The group said its mortality figure was almost certainly an underestimate. The estimate was a summary of findings from six surveys carried out last month with refugees who had fled Myanmar for Bangladesh.

Click HERE to read more from the New York Times