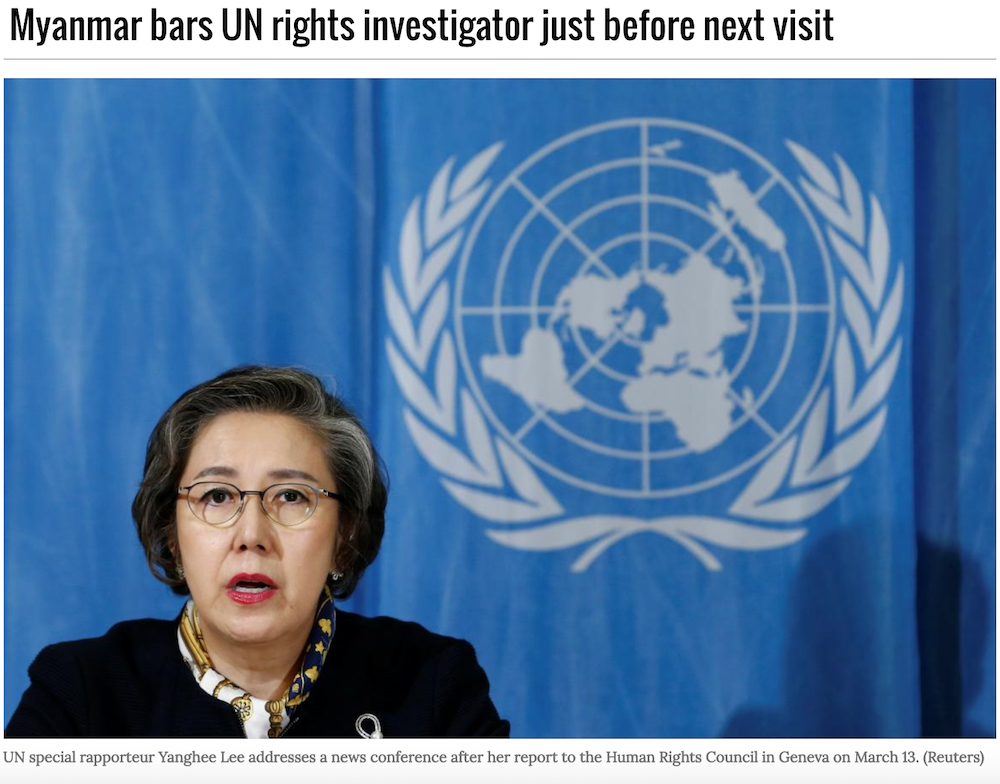 GENEVA — The UN independent investigator into human rights in Myanmar has been barred from visiting the country for the rest of her tenure, she said on Wednesday.

UN special rapporteur Ms Yanghee Lee said she had been due to visit in January to assess human rights across Myanmar, including alleged abuses against the Rohingya in Rakhine State, but Myanmar had now told her it would not cooperate with her any more.

“This declaration of non-cooperation with my mandate can only be viewed as a strong indication that there must be something terribly awful happening in Rakhine, as well as in the rest of the country,” she said in a statement.

“It is a shame that Myanmar has decided to take this route,” she said.

“The government has repeatedly denied violations of human rights are occurring throughout Myanmar, particularly in Rakhine State. They have said that they have nothing to hide, but their lack of cooperation with my mandate and the fact-finding mission suggests otherwise.”

She hoped Myanmar’s government would change its mind, adding that she was “puzzled and disappointed”, since its Ambassador in Geneva U Htin Lynn had told the UN Human Rights Council only two weeks ago that it would continue to cooperate.

“Now I am being told that this decision to no longer cooperate with me is based on the statement I made after I visited the country in July,” she said.

Lee’s mandate requires two visits to Myanmar each year and she has visited six times since taking up the mandate in June 2014, although the government has consistently refused access to some areas, citing security concerns, the statement said.

More than 650,000 Rohingya fled into Bangladesh after attacks by Muslim insurgents on the Myanmar security forces triggered a response by the army and Buddhist vigilantes.

Surveys of Rohingya refugees in Bangladesh by aid agency Medecins Sans Frontieres have shown at least 6,700 Rohingya were killed in Rakhine state in the month after violence flared up on Aug 25, MSF said last week.

The UN High Commissioner for Human Rights Mr Zeid Ra’ad al-Hussein has called the violence “a textbook example of ethnic cleansing” and said he would not be surprised if a court eventually ruled that genocide had taken place.